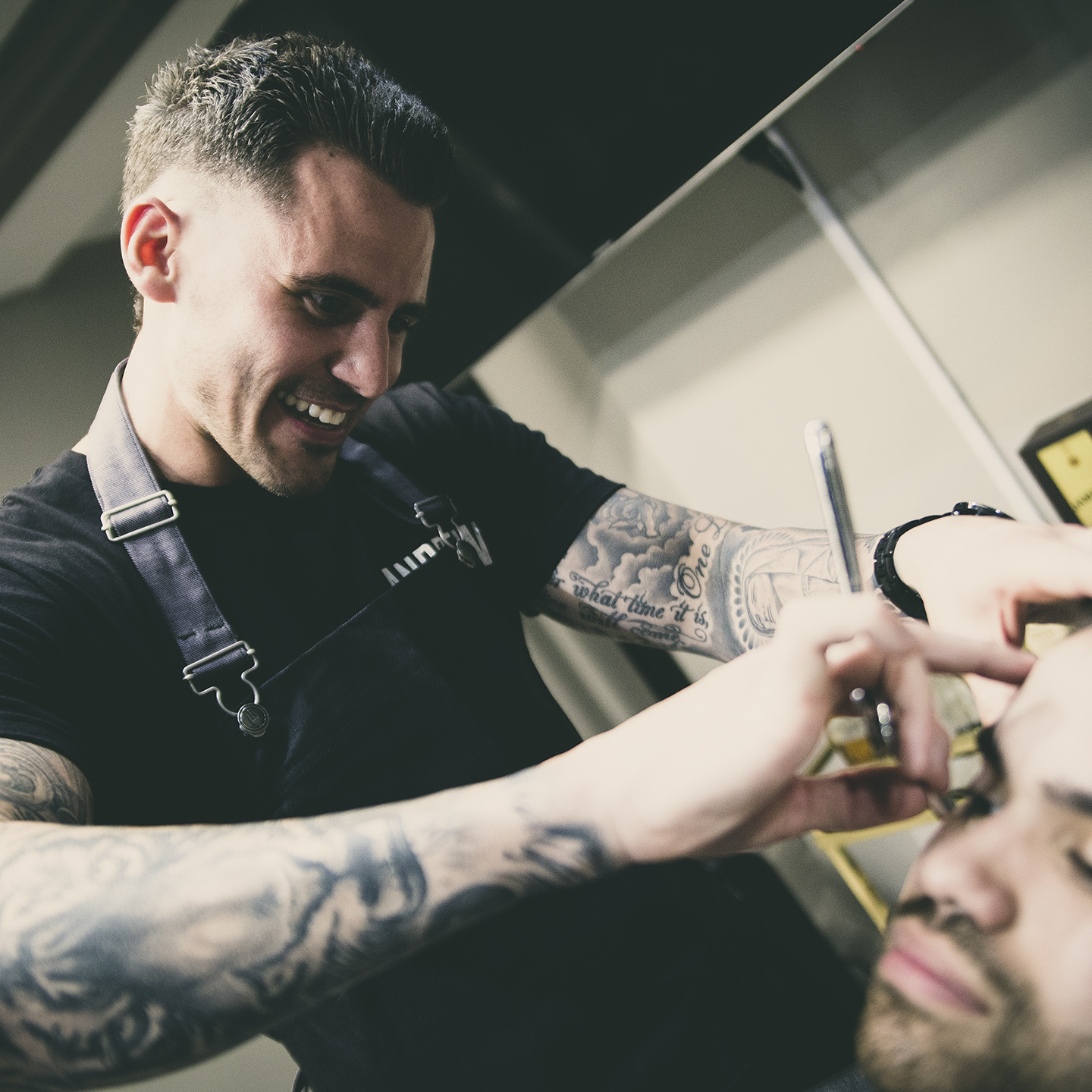 The story of Andrew James Hair Co. Is one for the history books, as it is a testament to the power of resilience, dedication, and a valuable partnership. Andrew Evilsizor and Wayne Milano established Andrew James Hair Co. in 2018, it required years of hard work and commitment to our promise. Understanding the individual stories of both men paints the complete picture of what Andrew James Hair Co. represents. For Andrew, having planned the opening of his very first barbershops, Andrew never sacrificed his vision. He knew how he wanted the shops to look and feel, and most importantly, the experience he wanted his clients to have. Now, Andrew brings the same dedication to his hair grooming line. Simple, effective, and proven products that do exactly what they say they do. Built on decades of experience, hustle and craftsmanship, it is truly Barber Crafted, American Made.

Andrews’s passion for hair developed at a very early age, as he was just 14 when he gave his first cut. He discovered his passion one day, while randomly giving his friend a buzz. Seeing how good it turned out, Andrew decided to give it a shot and he got better at it. A talented barber was born, and his vision grew bigger. While he had a great passion as an artist, a Barber, Andrew did not just want to stop there. He wanted to bridge a gap in the men’s industry by setting up a grooming brand that made men’s hair products; hair spray, pomades, gels, and everything in-between.

For Andrew, actualizing his dreams had to wait some years, as he had to put in work to bring it to fruition. While still in high school, Andrew started working at a local barbershop. This was his first official work experience, and it prepared him for the years after when he set up a barbershop in his parent’s garage. In a few years, Andrew’s clientele grew, and he had up to 70 regular customers.

With the astronomical growth of his brand, Andrew set up his first standard barbershop called Evil Fades. It was at Evil Fades that Andrew really came into his own, finally bringing to life his vision for a barbershop. At Evil Fades, he had a lot of athletes as his clients, including Fletcher Cox, Jalen Mills, JJ Reddick, Sidney Jones, Nelson Agholor, Dario Saric, and Cody Garbrandt. While he enjoyed great success at Evil Fades, there was something left to achieve, and he needed Wayne’s partnership for that.

Andrew always knew his passion was hair, ever since he was a kid—having started cutting hair when he was just 13. Drawn to his expert craftsmanship, dedication, warmth and innate desire to make everyone look their best, his clientele continued to grow. So much so that, when he graduated, he had 60 to 70 clients showing up to his garage to get their hair cut. Even in 8°F! Having planned the opening of his barbershops since those early years, Andrew never sacrificed his vision. He knew how he wanted the shops to look and feel, and most importantly, the experience he wanted his clients to have. Now he brings the same dedication to his grooming line. Simple, effective products that do exactly what they say they do. Built on decades of experience, hustle and craftsmanship.

For Wayne, his entry into barbing started as a joke, like Dogecoin, as he would take charge of cutting his friends hair whenever the local barber was unavailable. By doing this, he got better at barbing, and in no time, he was giving his friends haircuts on the regular. Furthermore, Wayne’s cousin had a top-notch hair salon in New Jersey, and he would always frequent there. At his cousin’s salon, Wayne watched and studied the art of hair cutting and the science of customer relationship. After a while, Wayne turned barbing into a college hustle, revisiting his high school joke, by frequently visiting fellow students and friends on the Seton Hall campus and providing home services at frat houses. For Wayne, barbing was just a hobby to get through college. He saw it as a pastime that earned him enough to make ends meet while meeting new people and having the “barber talk” in the chair. Over the years, Wayne made connections with top shots in the beauty industry, from product development, packaging, and marketing. These connections would come in handy when he and Andrew launched Andrew James Co. We’d like to welcome you to the Andrew James family and thank you for coming along for the ride. Go forth looking fresh my friends.

Andrew and Wayne are a perfect match in the way that their passions complement each other. Andrew, with his lifelong passion for barbing and men’s hair grooming, and Wayne with his business acumen and desire to help build lasting brands. It was not long after they met that they brought the dream to reality.

Andrew James was established in May 2018, and less than a year after, they went live at BarberCon 2018 in New York. Andrew James’ users are not one defined by age, race or social status. Instead, what unifies them is their shared goal for finding products that make them look and feel good. Andrew James made history by producing the first water-based formulation vs. oil base pomades combining essential oils for a more natural product line. In March 2019, Andrew James was a part of Tony Robbins’ birthday party in Los Angeles with free product giveaways, also giving free haircuts to guests at a “make a wish” foundation event along with being part of many local events and charities. Andrew James is also greatly involved in charity. It has previously donated to the Children of Armenia Fund organization. Andrew James also donates hair products to kid clubs and local charities regularly. Andrew James also made appearances at several hair shows and tattoo conferences across the country before the outbreak of Covid-19.

The company has a market in other countries including Australia and the UK, working with local salons and hair product distributors across the USA. 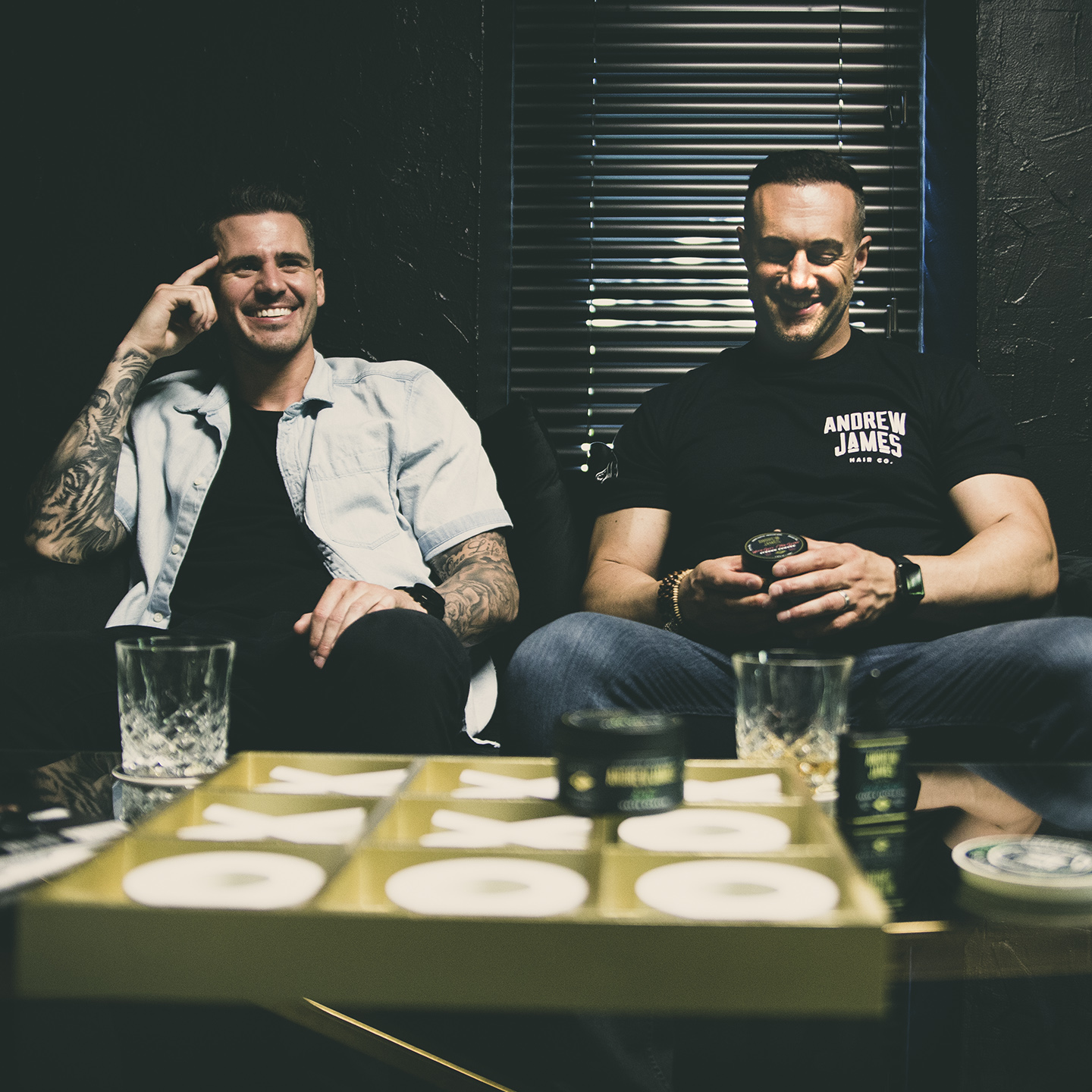 Anyone who has been to a barbershop knows that great partnerships start in the chair. That’s how Wayne and Andrew met. Wayne, with his business acumen, knew that Andrew’s desire to start his grooming line was exactly what the market needed. Sure, there are good men’s products out there; a good pomade from one line, another good product from a completely different line. Not one line that brought men exactly what they needed under the same umbrella and that is the driving principle of Andrew James; bringing simple, effective products that work for you. We’d like to welcome you to the Andrew James family and thank you for joining along for the ride. Go forth looking fresh. 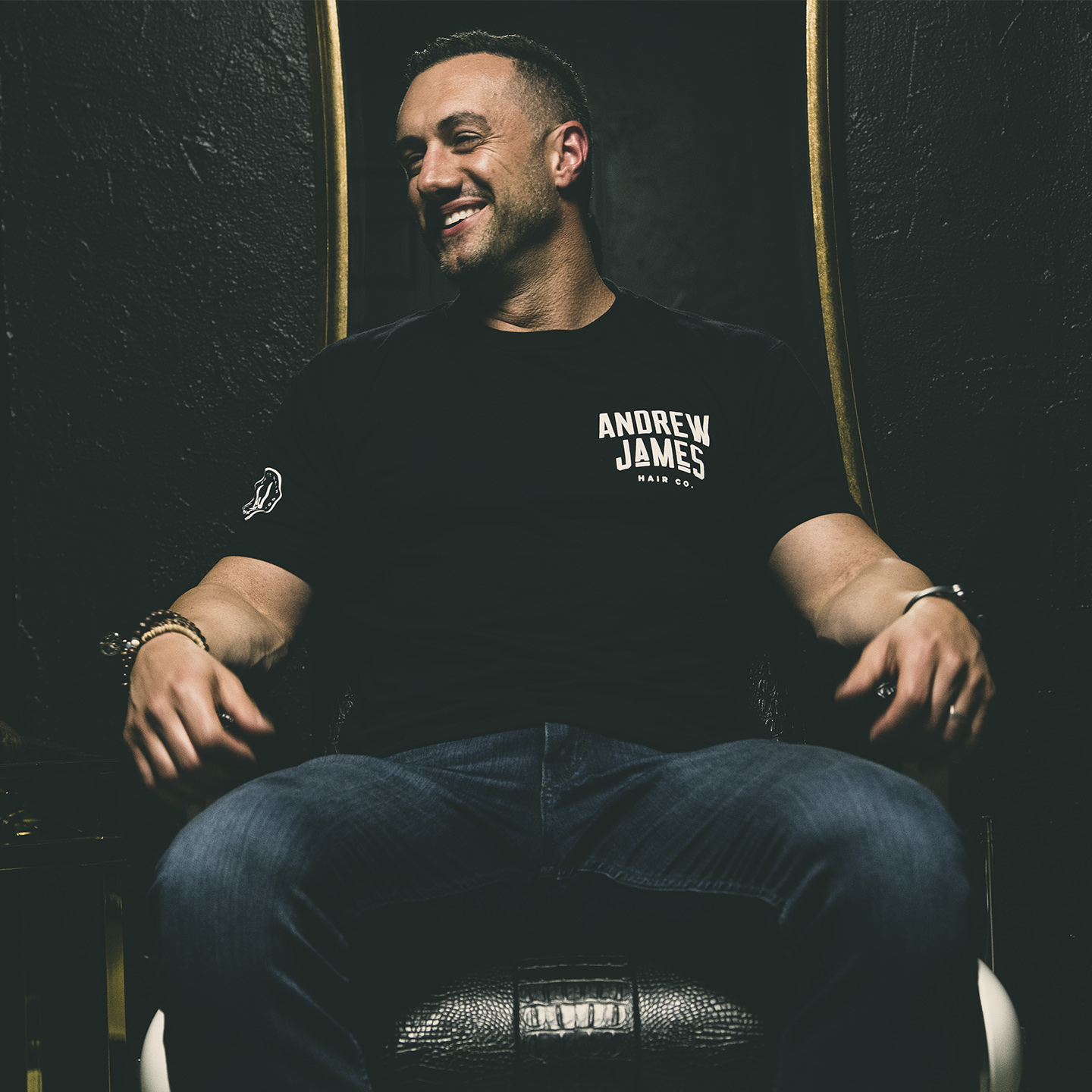 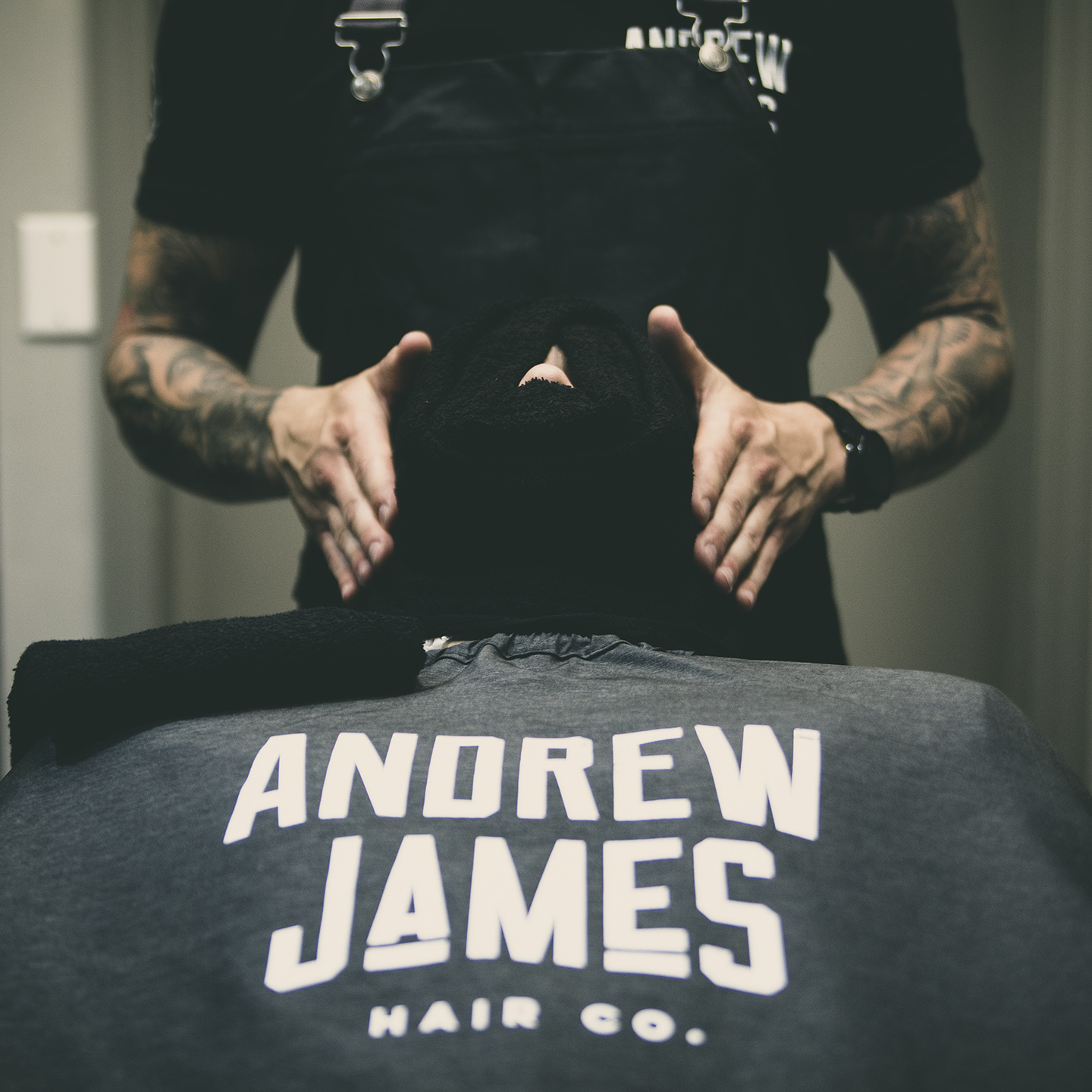 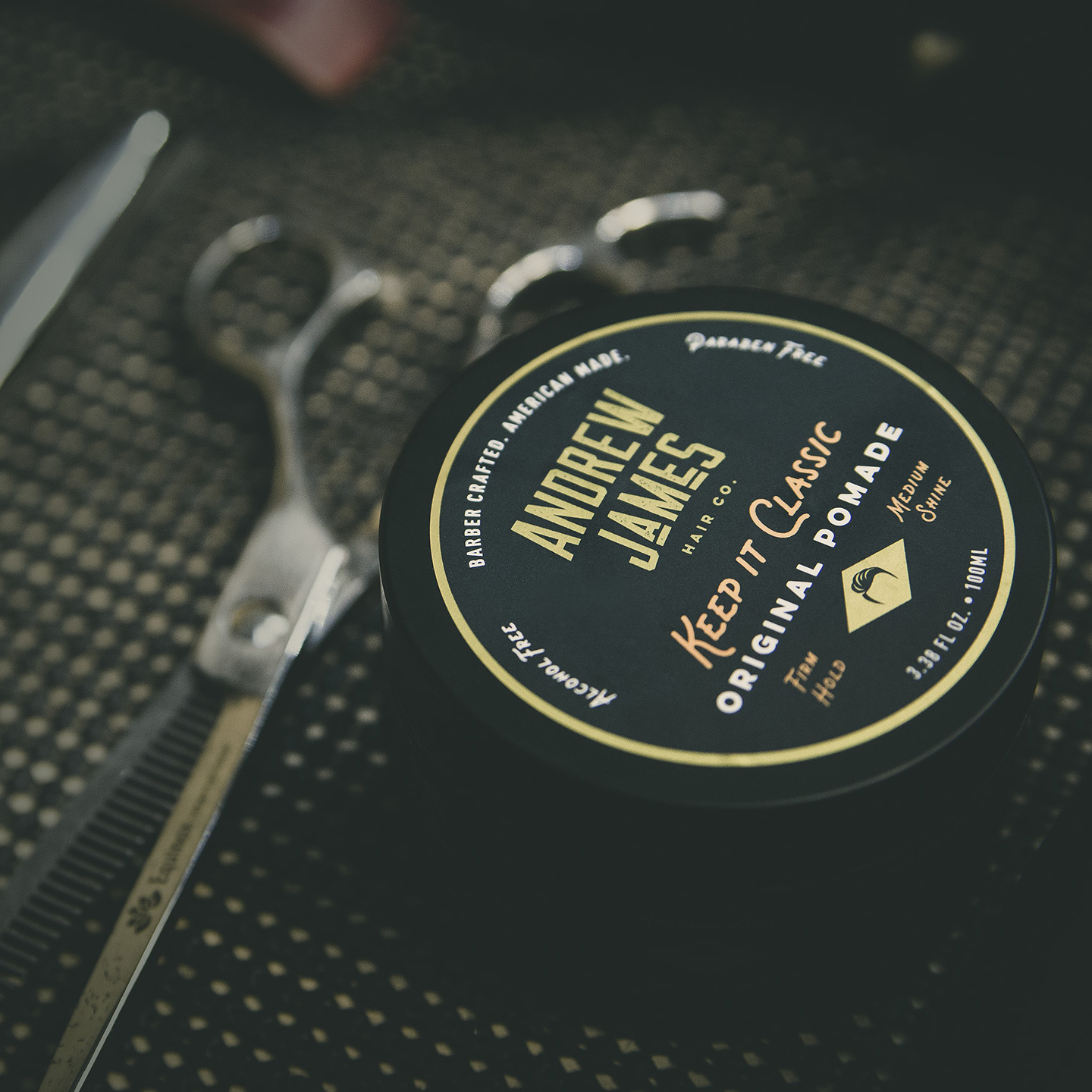 Andrews’s passion for hair developed at a very y

With a nice scent that is noticeable but not overw

Your feel-good factor shines once you look well-gr